Palin on which newspapers she reads: ‘Um, all of them”

Katie Couric asked Sarah Palin which sources she relies on for her news consumption. Caught off guard, Palin could not name a single news source:

COURIC: And when it comes to establishing your world view, I was curious, what newspapers and magazines did you regularly read before you were tapped for this — to stay informed and to understand the world?

PALIN: I’ve read most of them again with a great appreciation for the press, for the media —

COURIC: But what ones specifically? I’m curious.

PALIN: Um, all of them, any of them that have been in front of me over all these years.

COURIC: Can you name any of them?

PALIN: I have a vast variety of sources where we get our news. 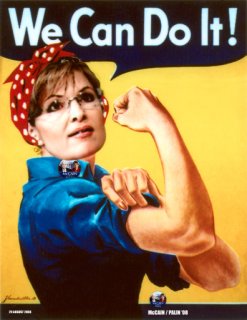 GOP vice presidential candidate Sarah Palin was interviewed by Charles Gibson the other day. Here is an excerpt of her comments on how to deal with Russia in the future:

GIBSON: And under the NATO treaty, wouldn’t we then have to go to war if Russia went into Georgia?
PALIN: Perhaps so. I mean, that is the agreement when you are a NATO ally, is if another country is attacked, you’re going to be expected to be called upon and help.
But NATO, I think, should include Ukraine, definitely, at this point and I think that we need to — especially with new leadership coming in on January 20, being sworn on, on either ticket, we have got to make sure that we strengthen our allies, our ties with each one of those NATO members.
We have got to make sure that that is the group that can be counted upon to defend one another in a very dangerous world today.
GIBSON: And you think it would be worth it to the United States, Georgia is worth it to the United States to go to war if Russia were to invade.
PALIN: What I think is that smaller democratic countries that are invaded by a larger power is something for us to be vigilant against. We have got to be cognizant of what the consequences are if a larger power is able to take over smaller democratic countries.
And we have got to be vigilant. We have got to show the support, in this case, for Georgia. The support that we can show is economic sanctions perhaps against Russia, if this is what it leads to.

If the statement was made to gain political mileage then it is OK , but if she is seriously considering a conflict with Russia , then God help us all