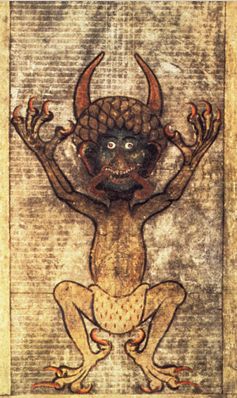 The Codex includes the entire Latin version of the Bible

According to legend the scribe was a monk who breached his monastic code and was sentenced to be walled up alive. In order to forbear this harsh penalty he promised to create in one single night a book to glorify the monastery forever, including all human knowledge. Near midnight he became sure that he could not complete this task alone, so he sold his soul to the devil for help. The devil completed the manuscript and the monk added the devil’s picture out of gratitude for his aid.

You can also browse the manuscript here